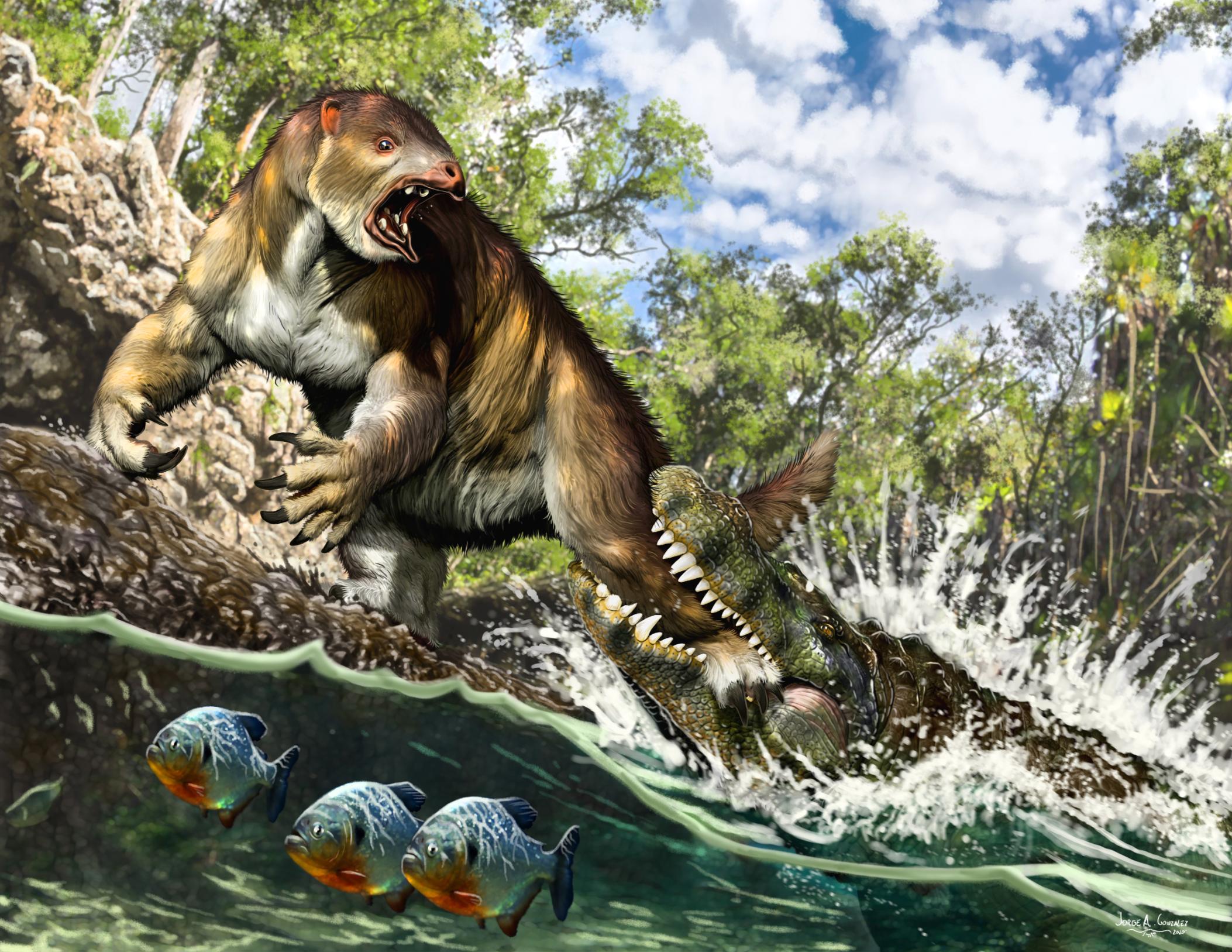 When a young crocodile-like caiman chomped down on the hind leg of a ground sloth 13 million years ago near the Napo River in Peru, it left behind 46 tooth marks as evidence.

Now, researchers have been able to reconstruct the scene of the attack after analyzing the unfortunate ground sloth’s hind leg bone.

As an adult, this ancient caiman had a bite force of seven tons, more than four times the strongest bite ever measured in the animal kingdom according to previous research, study author Rodolfo Salas-Gismondi said in an email. He was not involved with the previous research. The juvenile Purussaurus that attacked the ground sloth had the bite force of a modern caiman, which was still powerful enough to break and collapse bones.

After the adult Purussaurus, the next strongest bite comes from the modern saltwater crocodile, Crocodylus porosus, which has a bite force of 1.6 tons.

“The bite was so powerful that many teeth perforated the tibia and collapsed extensive portions of the cortical bone,” said Salas-Gismondi, a paleontologist at the Universidad Peruana Cayetano Heredia’s BioGeoCiencias Lab in Lima, Peru. “The ground sloth did not survive.”

This fossil evidence is a rare look into the relationship between predators and prey that once lived in Amazonia, or the area surrounding the Amazon River in South America, millions of years ago.

“The tibia discovered in the Peruvian Amazonia is the first one of a mammal bearing crocodylian tooth marks and therefore crucial for understanding the dynamic of ancient ecosystems,” Salas-Gismondi said in an email.

“This is an unusual snapshot of the feeding behaviour of the largest non-marine predator since the extinction of non-avian dinosaurs. We have recovered thousands of fossil bones from these Amazonian localities and, up to now, the tibia of the sloth is the only bone with tooth marks that we have discovered.”

The fossil of the ground sloth’s damaged tibia was found in 2004 by François Pujos, study coauthor and paleontologist specializing in evolution of ground sloths at the Instituto Argentino de Nivología, Glaciología y Ciencias Ambientales in Mendoza, Argentina.

As he explored rock outcrops in the Pebas Formation along the Napo River in Peru, Pujos discovered that the rocks were full of bones.

He collected the tibia, intrigued by the teeth marks on the bone, but he and his fellow researchers weren’t sure what could have caused the damage. Little was known at the time about the animals that lived in the area during the age the ground sloth was alive.

So the fossil was stored at the department of vertebrate paleontology at the Museo de Historia Natural-UNMSM in Lima, where Salas-Gismondi is also a curator.

A research team including French, Peruvian and American scientists studied the Pebas Formation area for 15 years, learning about the animals that once lived there by studying the bones they left behind.

Lakes and swamps served as the perfect habitat for ancient crocodiles and caimans between 11 million and 20 million years ago. And the research team realized that in 2019, they were “ready to know who killed this ground sloth,” Salas-Gismondi said.

“We found that tooth marks in the tibia match with the anatomy and dentition of the top predator of the Pebas System, the giant caiman Purussaurus,” he said.

The study published Tuesday in the journal Biology Letters.

Purussaurus could reach 33 feet in length as an adult, but the researchers believe this was a young one that was about 13 feet in length. And it was in just the right place and time to lunge out from the swamp and attack the lower hind leg of an unsuspecting ground sloth likely foraging for plants along the shore.

This ground sloth was likely about 176 pounds, similar in size to modern capybaras, the largest modern living rodents in the world. Capybaras can be found in South America.

And the ancient sloth was no match for the bite force of the young Purussaurus, which left pits, scoring and deep punctures in the sloth’s leg bone.

If the sloth had survived, there would be evidence of bone regeneration.

The researchers haven’t ruled out the possibility that the bite marks occurred shortly after death as the Purussaurus dismembered the sloth’s carcass.

Purussaurus’ teeth match the marks found on the fossilized bone, the researchers said. Other predators living in South America at the time included marsupials, crocodiles and giant flightless birds. The birds didn’t have teeth and the bite marks from marsupial teeth don’t match those on the bone. So the researchers analyzed teeth from the different types of ancient crocodiles and caimans to see which one fit best.

The strong, blunted cone-shaped teeth of Purussaurus matched the deep, large punctures on the bone. Parts of the bone had even collapsed under the force of the bite.

Portrait of an ancient predator

Purussaurus were the largest predators in this environment at the time.

Most crocodiles and alligators experience a change in diet as they grow. Newborns eat insects and spiders. As they grow, their bite force changes, meaning that juveniles and adults have the ability to capture mammals and turtles.

With its massive bite force, Purussaurus wasn’t limited by size when choosing its next meal. This is evidenced, along with the ground sloth tibia, by the fossilized carapace of an ancient large turtle at the museum where Salas-Gismondi works.

This fossil shows that an adult Purussaurus took a bite of 25 inches out of the turtle’s shell and amputated one of its hind legs. However, unlike the ground sloth, the turtle survived based on evidence of bone regeneration in the carapace.

Finding fossils in Amazonia is difficult because of the dense tropical rainforest environment and heavy rains, but studying areas where ancient rocks are exposed can shed light on what ancient life was like in this area.

The researchers only get a month or so during the dry season to study these rocks before torrential rains have the force to wash away the rocks and fossils.

“The good news is that every year a new window to the past opens,” Salas-Gismondi said.