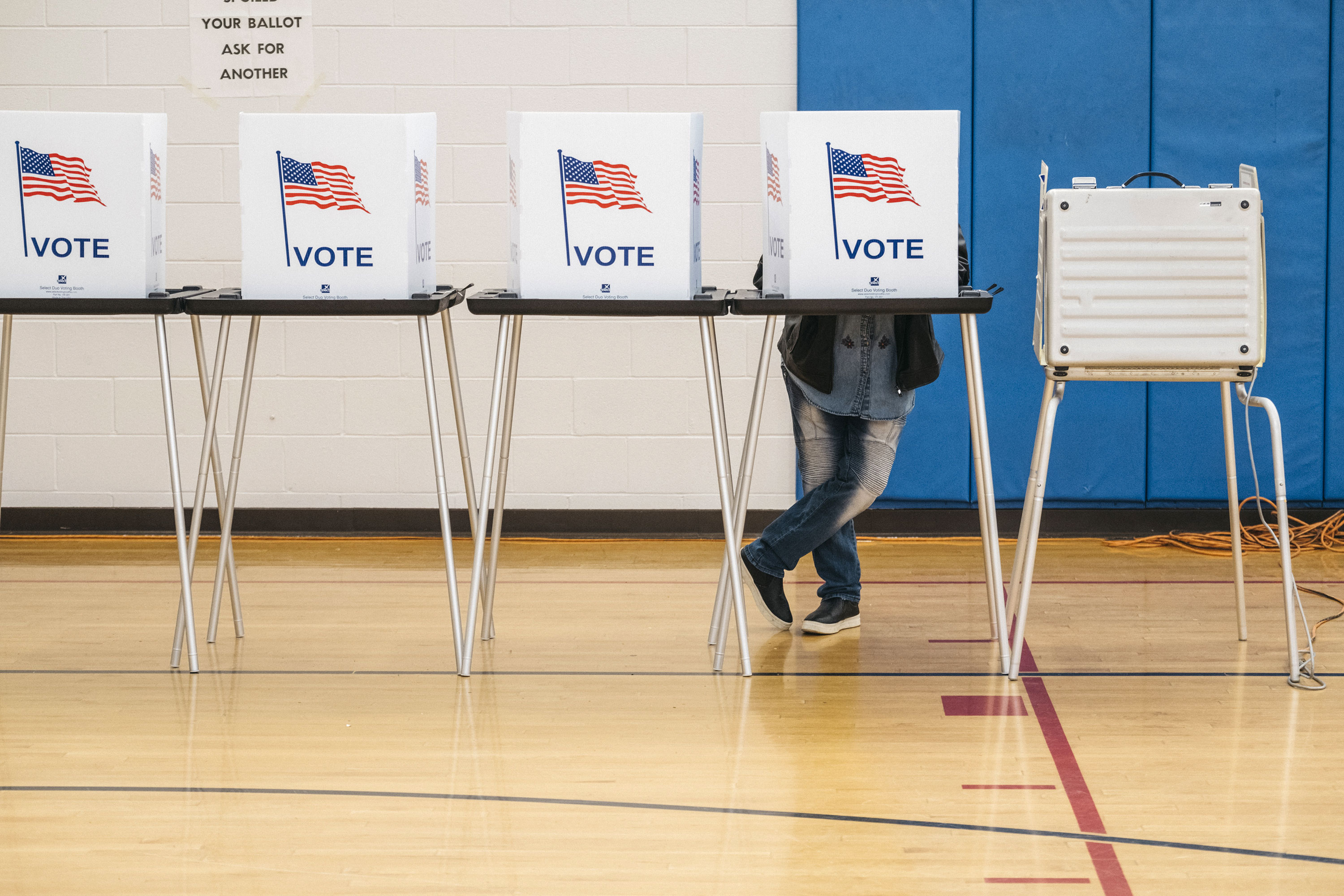 The Honest Elections Project, as the group is known, is supporting a lawsuit against Michigan — where Trump won in 2016 by fewer than 11,000 votes — that claims the state has an “impossibly high” high voter registration rate.

Lawyers working with Honest Elections also have sent letters this year threatening legal action over what it views as bloated voter registration rolls to officials in three other political battlegrounds: North Carolina, Florida and Colorado.

Work by the group, led by former Heritage Foundation policy analyst Jason Snead, is part of the stepped-up activity among conservative groups to push back on efforts, largely in Democratic-run states, to expand mail-in voting, extend deadlines for counting mailed ballots and otherwise relax voting rules amid the coronavirus pandemic.

The push to scrub voting lists comes as states across the country finalize plans to automatically send absentee ballot applications or ballots to voters. Tens of millions of Americans are likely to vote by mail this fall, which Trump and his conservative allies have cast as ripe for fraud, although the President himself has twice cast absentee ballots in Florida this year.

Thirty-five states now allow all voters to request a mail ballot for the general election. Nine states and DC will automatically send a ballot to registered voters. Six states require an excuse to vote absentee.

During a high-profile speech on the opening day of the Democratic National Convention last week, former first lady Michelle Obama singled out “purging voter rolls” as one of the techniques she said is being deployed by “folks who know they cannot win fair and square at the ballot box.”

Election experts say voter fraud is extremely rare. And voting-rights groups and Democratic lawyers have headed to court to push states to create multiple avenues for people to cast ballots more easily during the pandemic.

Republicans, including Trump’s campaign, have fought those efforts, broadly arguing that Democrats are seizing on the pandemic to rewrite well-established election laws.

Snead said his group’s goal is to establish “reasonable rules for the election system and provide a system everyone can believe in and find credible.”

And if states “go through a process of automatically mailing ballots out to a list that has been allowed to accumulate a significant number of these outdated voter registrations, you guarantee that ballots are going to be going to disqualified voters,” he said.

Honest Elections, which began its work earlier this year, is part of a network established by Federalist Society co-chairman Leonard Leo and the conservative allies who have helped Trump advance the appointment of conservative judges to the federal bench, public records analyzed by nonpartisan Center for Responsive Politics and The Guardian show.

Leo, who has built a formidable conservative legal movement from his perch at The Federalist Society, played a key role in helping both Brett Kavanaugh and Neil Gorsuch ascend to the Supreme Court, serving as a judicial adviser to the White House.

Leo did not respond to interview requests.

Cases that attempt to remove voters from the registration rolls have been brought by conservatives around the country, although it’s not clear that they can sway outcomes before Election Day.

In the swing state of Pennsylvania, for instance, a lawsuit from the conservative group Judicial Watch seeks to remove an unspecified number of voter registrations in three counties around Philadelphia.

An official with the Pennsylvania’ secretary of state’s office declined to discuss pending litigation.

Another conservative group, Wisconsin Institute for Law and Liberty, is seeking to remove roughly 130,000 voters from the rolls in Wisconsin, another battleground Trump won by a razor-thin margin four years ago. Honest Elections Project has filed briefs supporting the Wisconsin Institute’s arguments.

A hearing on the case before the Wisconsin’s Supreme Court is set for September 29, the institute’s president Rick Esenberg said. But a decision could come too late to affect voter registration in November’s election because state law prohibits any changes to the voter rolls within 30 days of the election.

The Wisconsin Elections Commission does not comment on lawsuits, a spokesman said. But in a statement issued when the lawsuit was filed, the commission’s administrator said the agency has complied with the state law on the clean-up of voter rolls.

In the Michigan lawsuit, meanwhile, Republican activist Anthony Daunt alleges that 16 counties on the state appear to allow ineligible voters to remain on their rolls.

Some states have worked aggressively to clean up their voting rolls.

In Georgia, where changing demographics have helped Democrats make inroads in politics, state officials and voting-rights groups have engaged in pitched legal battles over the state’s use-it-or-lose it policy. The policy allows election officials to cancel registrations after voters fail to participate in elections for several years.

“Purge programs … are carried out under the guise of helping prevent voter fraud but are often thinly veiled efforts to strip voters of their voices,” said Kristen Clarke, president of The Lawyers’ Committee for Civil Rights Under Law.

In an interview with CNN, Snead said it’s “completely untrue” that groups seeking to clean up voting rolls are doing so for partisan political gain. Those complaints, he said, are about “ginning up a political base” for Democrats.

“What this ultimately amounts to,” he said of Honest Elections’ work, “is making sure we have reliable voting rolls that tell us who is and who is not qualified to vote in a state.”

Overall, this year has seen a barrage of lawsuits from both sides. Justin Levitt, an election law expert at Loyola Law School in Los Angeles, has tallied more than 215 election cases related to the pandemic.

On the left, a coalition that includes the Democratic National Committee; Priorities USA, a deep-pocketed nonprofit Democratic group; and Fair Fight, a group founded by former Georgia gubernatorial candidate Stacey Abrams, is helping to support lawsuits in more than two dozen states that push officials to ease voting restrictions.

Richard Hasen, an expert on election law at the University of California at Irvine, said Honest Elections’ work marks a new direction for the leadership of the Federalist Society, that was started in the early 1980s and casts itself as a conservative and libertarian group committed to “reforming the current legal order.”

“While the Federalist Society and people like Leonard Leo have expressed views and interest about various parts of the Constitution and elections, this is the first election cycle where I’ve seen any connections to groups actually litigating over state rules and procedures,” Hasen said.

Leo is a prominent figure in conservative circles and has had an outsized influence on Trump’s judicial choices from the start, helping then-candidate Trump craft a list of potential Supreme Court picks ahead of the 2016 election — a move designed to sway conservatives skeptical of Trump.

Leo helped the White House as it shepherded Gorsuch and Kavanaugh through their successful Senate confirmations.

Earlier this year, Leo told Axios he was stepping away from his long-time day job as executive vice president of The Federalist Society to start a new venture, CRC Advisors, to help build a new conservative network. (He has retained his board position at the Federalist Society.)

He and his business partner, communications executive Greg Mueller, told Axios that they planned to work with two unnamed existing nonprofits, which would be rebranded as The Concord Fund and The 85 Fund, to help funnel money into conservative battles around the country.

Publicly available corporate records in Virginia, show that Honest Elections Project and several groups, including the Judicial Education Project and the Law and Policy Forum, are aliases for The 85 Fund. The 85 Fund’s officers include Carrie Severino, who runs the influential Judicial Crisis Network, which was at the forefront of advertising campaigns supporting Kavanaugh and Gorsuch.

In an interview with CNN, Snead described his organization as “a project of The 85 Fund.” As a nonprofit, Honest Elections does not have to disclose its donors’ identities to the public, and Snead declined to do so.

In the Axios interview, Leo and Mueller said their plans were modeled on Arabella Advisors, a consulting firm tied to the Sixteen Thirty Fund. The Sixteen Thirty Fund sent $141 million to liberal groups in 2018 alone, according to its most recent tax return. Its donors are not publicly disclosed.

Steve Sampson, a spokesman for Arabella, told CNN the firm is a “consulting business that supports effective philanthropy and impact investing” and works beyond the political realm. The Sixteen Thirty Fund is a client, he said.

Amy Kurtz, executive director of the Sixteen Thirty Fund, said in a statement that it works with nonprofit leaders, “not to advance a particular ideology but confront the biggest social challenges in our country, and that includes ensuring that during a global pandemic Americans do not have to choose between their health and exercising their right to vote.”

Honest Elections is focused on an array of issues, including opposing Democratic efforts to drop witness signatures on absentee ballots and extend deadlines for counting mail-in ballots. It also has sided with Florida Republican officials in defending a law that requires former felons to pay off outstanding court fees and fines before their voting rights are restored.

In the Michigan lawsuit, the group provided data analysis and helped connect the plaintiff with the lawyers it has used in its cases, Snead said. They include the law firm of William Consovoy, who has represented Trump personally and whose firm has represented Trump and the Republican National Committee in election cases.

The Michigan suit compares the counties’ voting-age populations, as estimated by the US Census Bureau between 2014 and 2018, to the number of registered voters in a county. The case argues that voter registration rates in 16 counties are suspiciously high when compared to the Census’ estimates of adults 18 and older in those communities.

In one county, the number of registered voters exceeds the Census’ adult population estimate, the suit says.

Jake Rollow, a spokesman for the Michigan Secretary of State Joycelyn Benson said the lawsuit uses “debunked claims and bad statistics” to delegitimize the state’s elections.

“It’s like taking a clock and a thermometer and saying, ‘They don’t match so you must be doing something wrong,'” he said.

Snead said he stands by the analysis. If a county has more registered voters than it has adult citizens as estimated by the Census, “that’s a clear red flag that there’s something going on,” he said.

Honest Elections and other groups in the conservative ecosystem on voting-rights issues argue that states should not race to alter their long-established laws on voting in November. Instead, absentee balloting should be reserved only for those most at risk of Covid-19 complications, they say.

Hans von Spakovsky, who oversees election work at Heritage and sat on a voting integrity commission Trump assembled during his first year in office and dismantled less than a year later, said voting in person can work with appropriate safeguards.

“We could all vote in person in November,” von Spakovsky said during a recent Heritage-sponsored webinar, entitled “Election Integrity: Preventing the Coming Crisis in the 2020 Election.”

“We should insist on it,” he said.